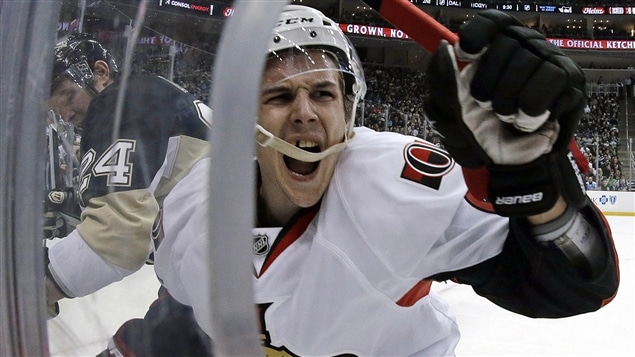 As my friend AngryHabsFan eluded to already, yesterday was the end of the world as we know it for Sens fans. Matt Cooke's skate caught Karlsson in the Achilles tendon last night on a scuffle in the corner.

First off don't even think that this was Matt Cooke being a dirty player and that he did this on purpose. It was just one of those freak plays that happen.

No timeline has been given yet for Karlsson's return but I think its safe to say that he won't be back this season. Hopefully he can return from this injury and still be a great player. We already have Michalek playing on robotic knees so hopefully EK can get a hold of Milo's doctor.

Speaking of Michalek he also disappeared before the game last night with a mysterious undisclosed injury. No word on what exactly is the extent of his injury yet.

So without Spezza, Michalek, Karlsson and Jared Cowen I think its safe to say we are fucked and need to focus on shipping out Gonchar at the deadline and going for one of those early draft picks. McKinnon and Jones here we come.
AngrySensFan Injury Karlsson Ottawa Senators

Angry Habs Fan said…
Maybe he'll be back for the Stanley Cup finals in July? Bottom two teams play for the cup this season hahaha
February 14, 2013 at 8:55 PM