Before the Puck Drop: Sens vs Pretty Phly for a White Guy Sports 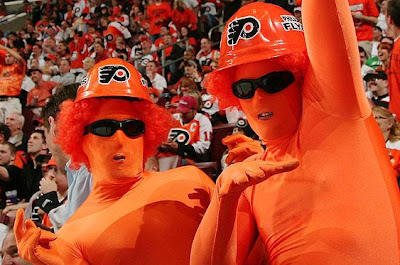 Today at noon the Sens go into Philadelphia where they hope to run into Tom Hanks and Denzel Washington to talk about AIDS.

Ben Bishop will be back in goal until further notice or until Lehner poison's his oatmeal, which ever comes first. Lehner played really well against the Bruins but I'de like to see Bishop get back in the net. Remember, if Bishop plays 9 or more games of 30+ minutes this season he remains an RFA this summer. Meaning its easier to keep him or that his trade value will be  higher.

Flyers have not at all met expectations so far this season, currently sitting outside of a playoff spot while the Binghamton Senators have been surprising alot of people by going 5-1-1 while missing Spezza and Karlsson.  Karlsson by the way still leads the Senators with 6 goals this season. Who's in second you ask? Why that would be Jim O'Brien. A guy who is a healthy scratch every few games. That stat should tell you exactly how the Senators have been winning of late. They don't score much, they dont give up many goals and they get a total team effort night in and night out.

Should be an interesting game as the defensively shaky Flyers face a team that can't seem to put the puck in the net. I expect a very sloppy turnover filled game and a 3-1 win for the flyers. Look for Danny Briere to be your Sens killer today he always seems to score a couple against us in key moments.