Before the Puck Drop: Sens vs Charles Wang's Penny Pinchers

This afternoon the Sens visit Brooklyn Long Island to play John Tavares and Matt Moulson. Whats that? the Islanders have other players? Crazy!

Luckily for the Sens they get a cahnce to rebound from a tough game against the Flyers against the 13th place Islander, who are 2-8-1 at home. So ya I feel good about todays game. Robin Lehner gets the start and will be up against Nabokov and the anti-government ghost of Tim Thomas.

For the last week in Sens land the question everyone has before a game is where are the goals going to come from? Well I will tell you right now. Everyone owes me 20 bucks if I get it right. Lets see $20 x all  8million of our readers= I will not be receiving any money. But I digest, Zach Smith will score his first goal of the season and Jakob Silfverberg will receive a stretch pass from Wiercoch for the game winner. Turris will score an empty netter with 34.3 seconds remaining in the game.

BTW Mike Lundin has a concussion after a blatant charge from some guy whos name is impossible to spell/pronounce on the Flyers. Expect him to heal miraculously once the player has his hearing and receives a Shanaban. Anyways Andre Benoit slides into the lineup in Lundins place. Fun!

Alfredsson is god! Good on him for going after Zac "No H" Rinaldo. The Sens were frustrated and Alfredsson used his old man powers to make Rinaldo crumble to the ice from a very weak cross-check placed to Rinaldo's protective headgear know as a "helmet". Does not appear as though Alfie will be receiving any supplemental discipline probably because the 5 and 10 minute majors assessed during the game were pretty harsh/deserved if your not a Sens fan to begin with.
alfredsson AngrySensFan brooklyn islanders long island

this was an exceptionally nice post. Taking a few minutes and actual effort to generate a really good article 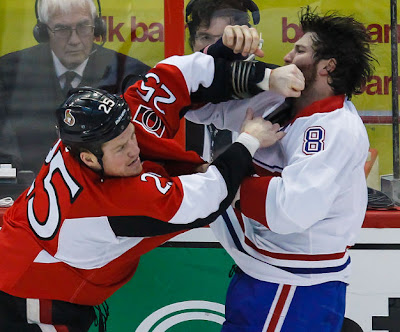 Rematch Tonight? Sens: #11 Daniel Alfredsson fakes throwing his stick into the crowd during a Maple Leafs Game. Habs: #11 Saku Koviu Returns from battling cancer and gets an emotional standing ovation from the crowd Sens: Make the Stanley Cup finals but lose to a team from California. Habs:  Make the Stanley Cup finals but beat a team from California to win their 24th championship. Sens: Have a roster full of young players with a bit of potential. Habs: Have a roster full of young players who are nearly leading the team in points. Sens:  Original logo featured the flag of Canada with a backdrop of the Parliament buildings. Habs: Operate within a province that is man enough to be its own country. Sens: Won Stanley Cups like 90 years ago. Habs: Won Stanley cups like 90 years ago, and then in nearly every decade after that. Sens + Habs: The Radek Bonk years *cold shivers* Sens: Drafted Alexandre Daigle in 1993 to be a team leader moving forward. Habs: Draf
Read more