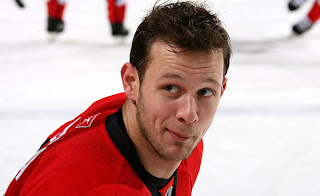 A day after a convincing win against a streaking Habs team the senators got some bad news. Wait a sec I didnt build that up enough. WE'RE SCREWED!

Jason Spezza re-aggravated his old man back and will be out "indefinetly" and by "indefinetly" I mean MINIMUM 2 whole months and probably the whole regular season. This Sens squad is barely a playoff team WITH Spezza, without him....yikes. Could be a rough ride.

I think Kyle Turris has played great so far this year but a numero uno centreman in the the NHL? thats a stretch. I think he needs Spezza on the ice to draw some of the defenses attention away from himself. And after Turris....well it looks like we'll be trying to convince ourselves that Peter Regin is a top 6 forward again. Other options? well considering Zibanejad played the least of any player last night I'de say thats not an option Paul Maclean will look into. We could try calling up Stephane "Tiny Head" Da Costa if you like 5 points in 22 NHL games experience. Although he has been mildly ripping up the AHL for 2 seasons now so I dunno, maybe. On the Free Agent market Jason Arnott is still available right? But at the same time I'de says his days as a capable NHL forward are over. Would I make a trade for a rental player? We do have Ben Bishop as trade bait. But who is even available. Colorado isn't trading O'Reilly, and Stephen Weiss is going to take more than Bishop to land and Florida already has a good young goalie in Markstrom.