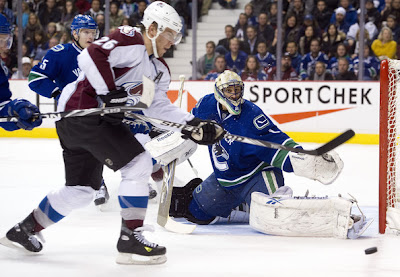 The Canucks will face off against one of there division rivals tonight at Rogers Arena. The Canucks have won seven straight against the Avalanche dating back to 2011. Three of those wins have come at the hand of shutouts by both #1 and #35.
The Canucks might have an advantage in tonight's match up with the Avalanche due to the injury to Colorado's captain Gabriel Landeskog. Schneider will likely get the nod tonight as luongo played two nights ago against the L.A. Kings and was unable to get the win.

Both teams only have two wins on the season with the avalanche having a record of 5-2 and the Canucks having a record of 6-2. Based on this years stats of goals per game, pk, pp%, shots per game, and other relative stats it can be seen on paper that these two teams are fairly evenly matched.  Based on what I have seen from both of these teams this season I would also have to agree with this statement. I believe that the Canucks are obviously the better team, but the way they have started this 48-game shortened season they are not playing like the Canucks from the past two years. This could be because of the injuries to the team losing two exceptional forwards in David Booth and Ryan Kesler. If Zack Kassian and Alex Burrows keep playing tonight as they have been in the past few games I don't think the Canucks will have much to worry about and should be able to get the W and hopefully boost their and play a season like they have been in the past few years.
AngryCanucksFan