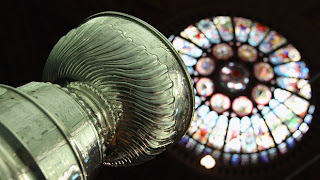 Now that the Habs season is over the blog format will be changing for the playoffs.  Instead of the usual Monday, Wednesday, Friday format there will now only be ONE post per week during the playoffs.

Now that we have that cleared up, I'm going to take a look at each series for the first round of the playoffs.

New York Rangers: Finally after years of being so close, and being a 6th or 7th place team, the Rangers finally win the Eastern Conference in a city where the fun never stops.
Ottawa Senators: In the first year of their re-build they just squeak into the playoffs ahead of the Sabres.  Leafs fans are a bit upset and shocked by this, but are still glad they live in Toronto, as compared to Ottawa, the city fun forget.


Boston Bruins: If the Bruins can keep Tim Thomas away from the public protests at the White House during games 3 and 4 then this team should have a chance at winning the series.
Washington Capitals: If only the Capitals had a superstar with a solid and consistent scoring touch to give them a slight chance at beating Boston....


Florida Panthers: Wait, really?
New Jersey Devils: The Devils need to conserve as much energy as possible against the Panthers so that when the playoffs REALLY start they will be set to take on the Rangers.

Vancouver Canucks: Odds on favourite to win the Stanley Cup after clinching the presidents trophy Saturday night.  Also the odds on favourite to be a city of flames before June.
LA Kings: Probably would have a really good chance of beating the the Canucks if everyone stopped laughing when the Vancouver bench decided to poke check the puck away every 2 on 1 opportunity the Kings have.


St. Louis Blues:  Finished second in the Western Conference because they have one of the greatest coaches of our era.  All they need now to win in the playoffs is an entire new roster.
San Jose Sharks: The Sharks have drawn an 'easy' team, and could probably beat the Blues if they didn't have Joe Thornton on their team.


Phoenix Coyotes: It might be the last chance hockey fans in the city of Glendale have to cheer on their Coyotes before relocation.  In that case, all 40 of them are planning to showing up for the first round matches.
Chicago Blackhawks: Best part of Blackhawks playoff hockey?  We all get to see how fat Vince Vaughn got over the winter.


Nashville Predators: Quickly becoming one the most loved teams in hockey.  After drawing the Red Wings as a first round opponent, you can be sure a lot of hockey fans will be jumping on the bandwagon in Nashville.  And in Nashville, the 'bandwagon' is a literal country style wagon.
Detroit Red Wings: Nobody likes the Red Wings anymore.  Hurry up and throw your octopus on the ice so we can start the games.

Winner: Red Wings in 7
April 11th Because It's The Cup NHL Playoffs