Opps, I Missed A Week 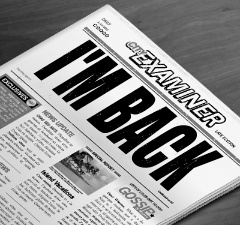 So the late evening posts didn't really work out this week.  The only night I was really not super busy was Wednesday night, and it just so happens there wasn't even a Habs game that night.  I saw some of the Sabres game Tuesday, and most of the Islanders game on Thursday.  Overall, it has been a pretty busy week, same for the Habs.

We've got 3 points so far going into tonight's game against the Sabres and I really want to beat them.  5 of 6 points in another awesome week would be amazing.  3 of 6 would be a big dud for the first time in awhile.  Also, if we want any chance of catching up to Pittsburgh and reclaiming first place in the East then we are going to have to start a big winning streak.  Let's make it two tonight.

For a Saturday it's a pretty light NHL schedule with only 9 games, but then again March Madness has started and after the first round I had a 59% correct rating.  My bracket is in rough shape. Damn you West and South Division.

Back to the Habs.  Ryan White is out with a lower body injury, but who really cares.  Also, what happened to 24 CH?  It's been weeks since a new episode came out!  I need my inside look fix at our awesome team!

Enjoy the bball this afternoon and the game tonight.  It just feels right, after a few week hiatus Saturday night hockey at the Bell Centre is back, and it's going to be awesome.


PS- If the Leafs beat the Bruins.....well, it will be most appreciated.
AngryHabsFan