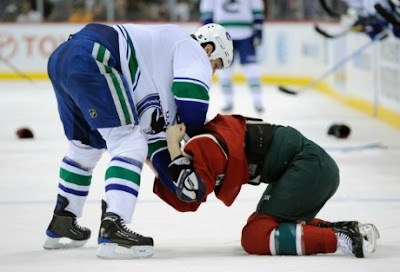 Tonight the Canucks will take on the Wild again as they look to destroy them like last game.  The only difference in tonight's games from last weeks game is that by the sounds of it Luongo might start in net.  This could go one of two ways either he will be spectacular in net and once again raise hype over who will be the starting goalie, or he will fail miserably like he has in the past against the wild and then Schnieder will get put in net and maybe then the controversy over who will start in net for the Canucks will be over, but I doubt that will happen!  Basically all the Canucks need to do tonight is the same things as they were able to do last game against the Wild, shut down the top line. Really that is all I have to say about tonight's game because if you check out my previous post about the game against the Wild my predictions are going to be basically the same, and the goalie controversy is still the same but only a different goalie is starting the game.
AngryCanucksFan