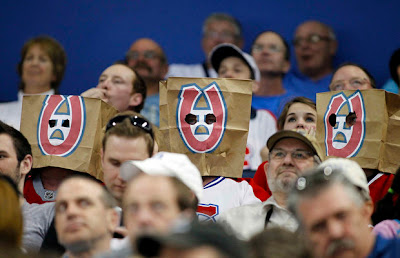 So this is it.  81 games later and the best the Habs could muster up this year, was a 15th place finish in the East.  If you're the last place team in the Eastern Conference then hands down you are the worst team in the league.  Forget the Blue Jackets, the West is way tougher.  Good Job, Montreal.

Remember October?  How they couldn't win a game at home?  We all just brushed it off and thought

'This will pass, it's just some rust from the summer.'

When I 'became' a Habs fan the tradition was of a losing team.  When Montreal won the Eastern Conference in 2008 I was shocked.  It almost felt weird to win game after game after game.  Losing feels right for my generation, and it sucks.

With that being said there is no better opponent to play in the last game of the season, than the 13th place Toronto Maple Leafs.

They too have a tradition of losing established, and they are 'raising' a generation of 'losers' as well.

While this game had huge implications way back in 2007, it has never really lived up to that standard since then.  Tomorrow nights game is not about a playoff spot, or draft picks really, it's about pride.  The kind of pride you had at 10 years old, when everybody got a trophy for participating in the season.

If Montreal wins, I'll be happy.  It might even change my perspective on next year.  If they lose, it will be so perfectly symbolic a poet could not write anything clearer.

So in short, if the Leafs win tomorrow night I'm boycotting the 2012 NHL playoffs.  I'm really not that excited about hockey anymore anyway.  Thanks for that Montreal.

Now excuse me while I go back to watching Tiger swear at Augusta, and wait for the Blue Jays to rack up some injuries.