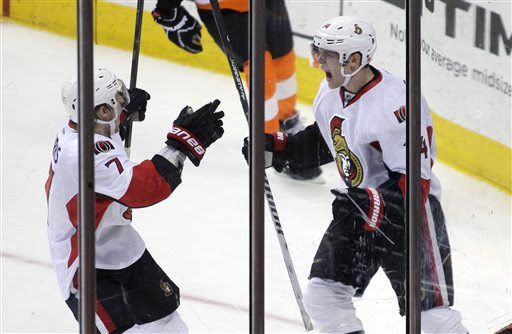 The Senators won finally, thats good. They play again tonight against New Jersey. Who are missing best player Kovalchuk, and captain Salvador. Also they are playing the undead corpse of Martin "Not Mike" Brodeur. We should be in good shape. Also Milan Michalek will make his return which hopefully means no more Matt Kassian. (Even though he wasnt as bad as usual against the Flyers last night).

I thought it was hilarious watching the Kassian-Smith-Neil line last night because you could see the complete unwillingness from Smith and Neil to pass the puck to Kassian, prefering to try and deke through the entire Flyers defence single handedly (which wouldnt be that hard because they suck).

JG Pageau looked pretty good and should get another game in tonight. He also got his first point on the Alfredsson empty netter. Maclean obvy likes him playing him in 3rd period PKs and at the end of a 2-1 hockey game.

Alfredssons goal makes him the first player to score 10 goals as a Senator this season. Not awesome, obviously has been a very low scoring, shared effort season for Ottawa. (Conacher has 10 goals but 9 were scored with the Lightning).

Cory Conacher looks really fast but not all that threatning. Starting to worry about the Kid Line because they havent done that much besides that 1 shift in Conacher's second game. Conacher has been kept to the outside of threatning areas rather easily as his size looks to be a serious weakness.

Michalek's return means we can get some speed on the top line. Latendresse has looked pretty good but he's slow, Alfie isn't 25 anymore. That top line is slow and Michalek should help with that. Expect to see Guyet in the bottom six tonight.

Anderson is back in net tonight, hopefully this is the game where he starts feeling comfortable in net again and posting better numbers.

Enjoy le match. Islanders won last night so we need to win our game at hand tonight to stay in 6th place outright.