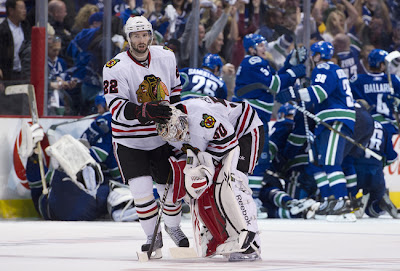 The Vancouver Canucks are looking to spoil the Chicago Blackhawks six undefeated wins in regulation tonight at Rogers Arena. The Canucks and Blackhawks will meet three times this season. The Canucks will look to break the Blackhawks regulation win streak after they lost in the shootout to the Minnesota Wild who have been doing very well this year after acquiring Ryan Suter and Zach Parise in the off season last year.

The controversy over trading Luongo in the last few weeks might have quieted down after luongo has made the last few starts for the Canucks, and has preformed well in both starts allowing the Cancuks to pick up points in those last games.  This will make the goalie situation very complex over the next few weeks depending on how Lu plays in goal and whether Schneider will get a chance to prove himself as the number one goaltender since having a very weak start to the beginning of the year.  I think that this should have no reflection on how Cory plays because of the extreme pressure he was under at the beginning of the year, no goaltender under that amount of pressure would be able to preform as well as he has shown in previous seasons.

Another surprising player this year other than Luongo is the play of last years acquirement of Zack Kassian who have been an offensive power house since starting on the first line with the sedins having 5 goals in 6 games which puts him near the top of the NHL in goal scoring so far this season.  Without him playing as well as he has I don't believe the Canucks would be doing as well as they have this season without David Booth and Ryan Kesler. The Canucks could have just as easily have a record of 2-2-3 instead of 3-2-2 without Kassian in the lineup or even if he was playing on the third or fourth line which would have been expected of him at the same time last year or even in the minor leagues.

The only thing we have to predict in tonight's game is how many goals will Kassian score and how will Luongo fair in net against one of his arch rivals from the playoffs a few years ago. will he be able to put the controversy past him? I say yes he has done a great job of doing that this year and I believe he will be able to do it for a while, Which shows the mental strength of Luongo. I know I would never be able to be under that much pressure and be able to preform as well as him, so really Schneider and Luongo really are going through the same thing just look at it in a different way I guess.
AngryCanucksFan

There are many important and useful services that are of interest to everyone see also :
شركة الاول لمكافحة الحشرات