Before the Puck Drop: Happy Hockey Day in Canada

Today's game kicks off at 2:00pm when the Ottawa Senators will play the Winnipeg Airplanes. We are already through a quarter (basically) of the season and the Senators are just trying to stay above water with Spezza out. So far they have looked alright but with him in the lineup they are a playoff team. Without him they may not be. The Jets have started off the season at 4-5-1 and once again play like they did last year, posting a really good record at home and a terrible record on the road with just one win so far. Lucky for us tonight's game is at Scotiabank place.

Mark Borowiecki was sent down to Binghamton to make room for Mike Lundin. Lundin looked alright in his debut but nothing to brag about. Gotta be happy for a guy like Andre Benoit who finally gets his shot in the NHL as a 29 year old rookie. Other than that I don't foresee any lineup changes as the Senators played pretty well against the HurriStaals. I honestly could not believe that Carolina won that game Ottawa was clearly the better team all night.

The Jets currently own the worst logo and jersey design in the NHL. By FAR! Yes worse than the Ducks brown D thing (honestly wtf is that thing) and worse than the Senators constipated Roman legionnaire. 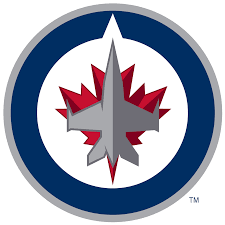 I get the whole "true north" thing and the jet obviously has to appear somewhere but I have 2 beefs with the logo:
1. Circles are boring, there is not way to make a circle look cool or interesting. The oilers have a circle and the only reason people like it is because Gretzky wore it 30 years ago. The Pittsburg Steelers have a circle logo and its fucking dumb, only reason people like it is again because it has so much history. And thats it for professional sports. Circles.
2. THE FUCKING PLANE LOOKS LIKE ITS EXPLODING! come on thats ridiculous. At least we all know that these Jerseys/Logos are only here for another 5 years so that the owners can bring back the original designs and sell a shit load of Jerseys. Again.