Because It's the Cup 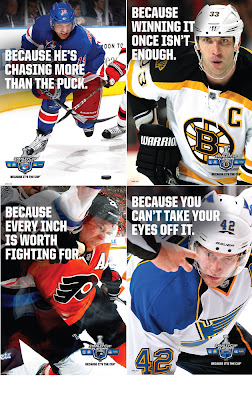 Last week the NHL launched its 2012 NHL promos for this years playoffs.

The last couple of seasons we have been blessed by the "History Will Be Made" ads.  They were both awesome, and led to many parodies on Youtube and across the internet.

What these new ads need is a little humour.  The NHL needs to poke fun at itself once in awhile, and I've compiled a list of HONEST "Because It's The Cup" ads the NHL could use:

- "Because It's The Cup.......high sticking will not be called in crucial games, giving the best player in the world a chance in the finals."

- "Because It's The Cup.....we've divided all regular season suspensions by four.  If you want to go all Chris Simon on someone, this is your chance."

- Because It's The Cup......that means hockey in the Southern USA in June....we didn't really think that one over."

- "Because It's The Cup.....you can put in 3 solid months of mediocre work, to win Lord Stanley after a long career in Boston."

- "Because It's The Cup.....you don't really have to shake hands with the Red Wings."

- "Because It's The Cup......we'll forget about you beating up that cab driver."