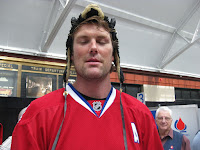 In light of the recent trade I thought it would be timely to take a look back at the long career of Mr Hal Gill.
Gill has not had the opportunity to really stand out in the National Hockey League over the course of his career.  In over 1000 games played he has scored 36 goals, and 143 assists.  But why is it that everyone knows who “Hal Gill” is?  He certainly has not put up the numbers to earn the respect of “household name.”
Lets take a journey back through the career of Gill, and examine some of this ‘legends’ highlights:
1993 NHL Entry Draft: In the eighth round, 207th overall, the Boston Bruins selected defenseman Hal Gill.  Usually when a selection is made in the eighth round it’s a joke move.  There are (usually) no good players left, and the wash out future AHL stars get to have their moment in the sunshine, with a free jersey and hat.  The thing is, is that in round nine of the draft with the 227th pick overall the Ottawa Senators selected future NHL All-Star Pavol Demitra, who finished his NHL career with 768 points.  Gill?  179 points and the skating speed somewhere between a snail, and the length of time it takes to complete a New York Times crossword.
The Boston Years: In 1997 Gill got the call up to the show.  In his first full season with the Bruins he recorded 10 points, not bad for a defensive defenseman.  The problem was his awkward skating style.  It was during his years in Boston that ‘Hal Gill’ became an adjective for the word ‘slow’.
“Hal Gill could have skated to both ends and back by the time you ran to first base, AngryHabsFan!”
“People who pay with credit cards in line at Wal-Mart are the Hal Gill’s of checkout lines.”
The Toronto Years:  After Gill was traded to the Leafs in 2006, expectations certainly were not high.  Fans in Toronto expected a slow moving defenseman, that might have a tough time keeping up with guys in beer league (this role has since been filled by Captain Dion Phaneuf).  Then, the unexpected happened.  Gill put up 20 points in his first season with the Leafs, all star material in his books.  The following year he put up 20 points again.  Okay, really, whats in the water in Toronto?  You ruined everything we came to ‘love’ about Gill.
Stanley Cup: After being traded to the Penguins in ’08, Gill suffered a heart breaking lose at the hands of the Detroit Red Wings in the finals.  In 2009, the Penguins found themselves back in the finals again against the Red Wings, and the snail himself helped cap off an amazing run, and a Stanley Cup victory by blocking shots, and being a leader on the PK.  The process was very demanding and hard on his veteran body. The good news for Gill is that he won’t have to worry about any of this again as a member of the Nashville Predators.
2010 Playoffs: A lot of the credit goes to Jaroslav Halak for his incredible playoff performance in 2010 against Washington and Pittsburgh (okay, well all of it).  What everyone tends to forget is that Hal Gill was an all star during this run.  He blocked so many shots that in an interview with a top secret reporter for AngryHabsFan he stated that he would love to retire as a secret service agent.  He's big, he's got the shot blocking skills, and when the going gets tough, he brings his A game.
You can follow Hal Gill on Twitter @Skillsy75
Good Luck in Nashville.
75 Boston Bruins Habs Hal Gill Leafs Montreal Canadiens Moving On Nashville NHL Predators Timeline Toronto Trade